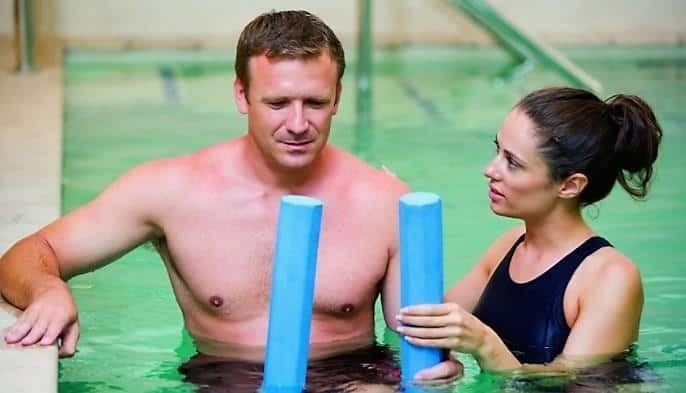 Tom* came to see us following a knee arthroscope, frustrated that he was unable to complete as much exercise as he would like, he was a keen runner. Tom* was worried that he was losing his fitness, he was experiencing pain and discomfort in his knee, as well as a restricted range of motion when trying to push his exercises. His Physio suggested Hydrotherapy, this is because the warmth of the water can help to relax muscle and tissues, allowing more freedom of movement in Tom*’s knee. The water also takes the weight out of his legs, allowing exercises to be performed more easily and his strength to build up without as much discomfort.

Tom’s* exercise program included hip, knee and ankle exercises such as squats, lunges and calf raises to rebuild the strength in his knee. There were also a range of motion exercises for his knee, because Tom* was worried about his cardio fitness we added a cardiovascular component to his program, allowing him to keep his cardio fitness up in preparation for his return to running. This was easier to do in the pool due to the decreased weight bearing through the leg meaning that pain and stiffness was not limiting his workout. To find out more about Hydrotherapy press here.