How does core stabilising exercise work? 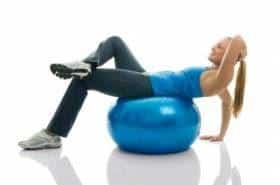 What is Core stability?

Lower back pain affects 80% of the population at some point in their life. Although an episode of lower back pain may settle in 4 to 6 weeks, the deep abdominal muscles remain impaired which can lead to reoccurence and reoccurrence of low back pain.

Specific exercises that retrain these deep abdominal muscles after injury are thus important for prevention of reoccurrence and exacerbation. Core stability is defined as “the ability to control the position and motion of the trunk over the pelvis to allow optimum production, transfer, and control of force and motion to the terminal segment in integrated athletic activities.”

There are 3 systems that act together to control intervertebral joint range of motion and in order to allow for the performance of daily living activities.

The Core stability muscles consist of:

How does Core work?

Those muscles are primarily involved in controlling the position of the spine and pelvis.

For efficient and skilful movements to occur, the collective musculature of the Core must be activated in precise patterns to both generate and absorb force while stabilising the trunk.

With the understanding of what Core stabilising muscles are and what they do, Core stabilising exercises generally involve trunk and gluteal retraining. To maintain stability of the Core in response to internal and external disturbances, the body must also integrate sensory, motor-processing and biomechanical strategies. Thus, stability program will often in-cooperate exercises that challenge your balance and coordination and also includes upper/lower limb strengthening exercises while still focuses on maintaining torso stability. With the knowledge of the involvement of diaphragm in maintaining trunk stability, it is also important to encourage efficient breathing while exercising.

Generally, you should begin with the Basic Core Exercises which usually involve contraction of TrA, and Pelvic floor muscles in isolation and this is often accompanied by a real time ultrasound machine to make sure you can see and feel the right contraction of those muscles. And be progress appropriately by your physiotherapist according to your stage of rehabilitation.