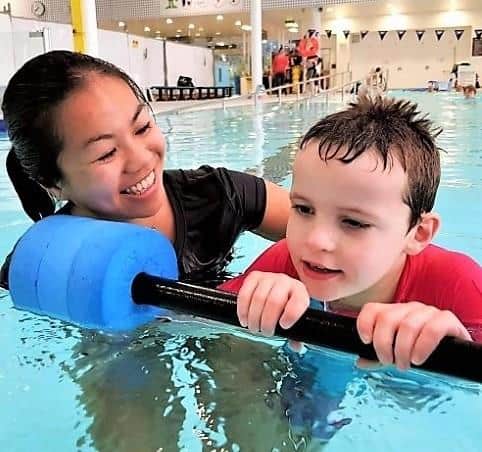 James* has Spina bifida his main complaint is tripping whilst walking and running, low muscle tone, as well as fatigue. On assessment James* showed poor joint stabilization and motor control in his trunk muscles and weak lower limb strength. He was struggling with his proprioceptive system, meaning that it was hard for him to understand where his body was in space, leading to trips and falls. James was also experiencing issues foot clearance and lower extremity dissociation making it difficult for him to walk.

We started James’s* hydrotherapy program in different depths of water, this helped improve his proprioceptive system, reducing the number of trips and falls. He was given exercises that involved small but quick movements starting from the trunk, challenging him to hold his position improving his neuro-muscular sustenance. James was also given stability exercises that were followed with mobility and lower extremity strength training, helping him to clear his foot well when walking and running. The use of assistive devices such as fins also helped with his recovery.

James* can now walk and run without any issues. He does not seem to get fatigued as easily and loves exercising in the pool. He has been given orthotics to help to correct issues that he has been experiencing with the length of his limbs. His understanding of where his body is in the space around him has also improved. To find out more about Hydrotherapy visit this link.
*The name has been changed to protect the privacy of our client.