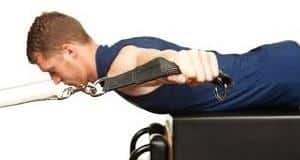 We recently had a patient at the Beverley practice who had an interesting story.

Tom* had taken up running a year earlier to try and get fit again before he turned 50. His eventual goal was to run a Marathon and he had increased his running training to prepare for his first step to his goal, running a half marathon. 10 weeks before the marathon Tom* started getting a sharp right hip pain when he ran, which persisted for a few hours after running. Whilst it didn’t affect his job as an accountant he was worried that he may not be able to keep training and run the marathon.

When the Physio examined Tom* they found that he had the beginnings of a nasty tendonitis and quickly began some intense treatment sessions of soft tissue releases, dry needling and stretching to get the pain under control. He was put on a rigorous home stretching program to balance out the tissues around his hip and pelvis.

All of this brought Tom’s* problem under control in a week and a half, but to get him back to training and on his road to the marathon he began a Physio Group Exercise program focused on improving his core stability and the stability around his hip.

While this was happening he started running training again under strict instructions so that he didn’t re-aggravate his condition. As he upped the Physio Group Exercise program so too did he up his running training. An occasional treatment during this time kept his soft tissues balanced and pain free.

As a result he ran the half marathon and while he was a little irritated after the run, the Physio settled his symptoms back down in one session and got him back to building up his Physio Group Exercise program.

Tom’s* training has increased in line with his continued Physio Group Exercise program and he is now working towards his ultimate goal of running a full marathon.