Rocktape for Treatment of Severs Disease 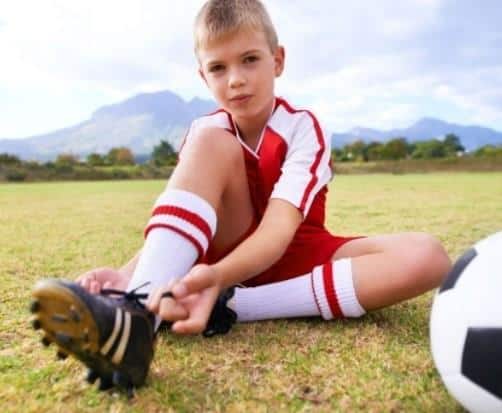 We would like to share this interesting story of a 12 year old boy who recently came into one of our practices with his mother.

Rowan* is studying in the 7th Grade and plays for his school soccer team. He trains for soccer twice a week and plays a game on the weekends.

He was limping during his first visit to the Practice. His mother accompanied him and narrated the history of his problem. Rowan* used to feel sore in the back of his heel especially after training and games. She complained that it was likely from lack of stretching. Scans showed a possibility of Sever’s disease which is inflammation of the achilles tendon at its attachment to the heel.

The Physio examined the heel and thought that the findings were consistent with the scan reports and hence commenced with manual hands-on therapy. Also, the Physio applied Rocktape extending from the base of the heel up to the back of knee where the calf muscle attaches. At the end of session, Rowan* walked out of the treatment room without a limp. He found the tape to be very supportive and at the same time non-restrictive.

On his follow up session, Rowan* was almost walking normally and within a couple of weeks had progressed to return to Sport. He was advised to continue using the tape for prophylactic reasons. His Mother eventually ended up buying a big Roll of Rocktape and was taught by the Physio to apply it correctly. Rowan* continues to play pain-free. Click here to find out more about our Sports Physiotherapy.