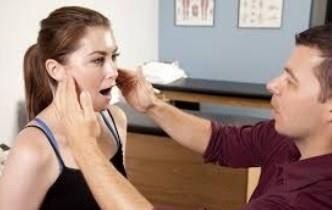 Below is a case study that outlines the successful treatment of a TMJ (The Temporomandibular Joint) sports related jaw injury.

Emily* came to see us after sustaining an elbow to her face during a game of netball. When she was assessed she had painful and restricted opening and sideways movement of her jaw. She also had tightness to her facial muscles, reported difficulty eating and chewing certain foods. Emily* avoided chewing on her right side and reported aching to her face upon waking and at the end of the day. She also noted that she had been avoiding speaking for long periods of time at work and going back to netball as she was scared of getting reinjured.

As well as poor jaw range of movement, Emily* also had decreased muscle length and ligament tightness affecting both the opening and sideways movement of her jaw. Due to the lack of range, this was causing her joints to become stiff and soft tissue structures to become tight.

After a couple of weeks of treatment involving ligament and muscle stretching techniques to her jaw, patient education on self management strategies and a home exercise program. Emily’s* range in opening her jaw improved and became less painful. She was able to hold longer conversations with people at work and began to introduce different textures of food to her diet.

Over 2 months, she had an 80% improvement and was able to return to netball and began eating foods such as apples and burgers and experienced no pain speaking. As part of Emily’s* on- going management she has learnt to use relaxation techniques to reduce facial muscle tension during the day and continues with her home exercise program.

Click here to find out more about the Sports Physiotherapy services that we offer.