The quicker you walk, the better it is for your health, in particular as you age. 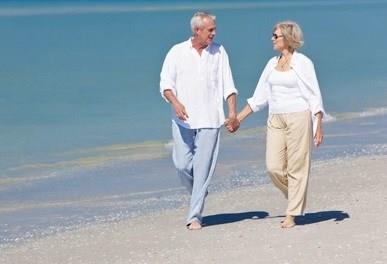 Does walking casually or at a faster pace make a difference to your overall health? It has been proven that those that walk at a brisker pace are at less of a risk of a premature death.
A study was completed on over 50, 000 walkers aged 30 years and over that resided in Britain between 1994 and 2008. Information was collected about these people that included topics such as their perception of the speed that they walked, this was then compared to the level of their health.
The outcome of the study found that any level of walking that was regarded as being above slow, decreased the person’s risk of dying from cardiovascular disease, such as heart disease or stroke. When compared to slow walkers, average paced walkers experienced a 20% reduced risk of early death from any cause and a 24% decreased risk of death from heart disease or stroke.
The participants in the study that walked at a rapid or speedy pace experienced a 24% reduced risk of early death from any cause and 21% decreased risk of death from cardiovascular issues. It was discovered that brisk walking was of great benefit to people that were older in age.
Those aged 60 years and above that walked at an average pace saw a 46% reduction in the risk of death from cardiovascular disease, whilst fast walkers experienced a 53% reduction. When compared to slow walkers, fast walkers aged between 45-59 experienced a 36% reduced risk of premature death from any cause.

How to interpret these stats
The statistics reveal that walking at an average brisk or fast pace is great for long term health and old age, in comparison to a walking at a slower pace. However the study was purely observational without total control over all influences. For example, the least healthy people may have reported walking at a slower pace, due to their health this may have resulted in them dying at an earlier age for the same reason. To reduce the chances of this occurring those with heart disease, who had experienced a stroke, or suffered from cancer when the study started, as well as those who died in the first two years of follow up were taken out of the study.
An additional factor to remember is that those that took part in the study interpreted pace according to their own perceptions. This means that there were no predetermined benchmarks for what “slow”, “average” or “brisk” walking is in relation to pace.
This means that the results can be understood as being relative to the person’s intensity of walking. The higher the level of exertion whilst walking, equates to an improved result in the person’s health.
For the middle aged healthy person, the walking speed of between 6 and 7.5km/h is regarded as being fast and if continued, will result in most people being a little out of breath. The walking pace of 100 steps per minute is regarded as being a moderate level of physical activity.
Walking is great exercise for your overall health, and is available to most people at all ages. This research shows that it’s worthwhile to move up to a stride that will challenge you, creating even more of a workout. Meaning that you arrive at your destination quicker, giving you more time to do the things that you enjoy.


‘The faster you walk, the better for long term health – especially as you age’ The Conversation