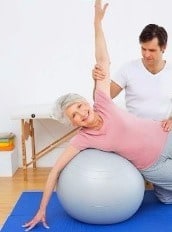 How Physiotherapy Helps With Vertigo

Jan* visited our practice, she is a 66 year old retiree who enjoys sewing costumes and knitting in her spare time. One day she went to fit a piece of garment whilst it was on the mannequin and found that she started to feel dizzy and light headed just from looking up. She then started noticing that her vision became blurred at times when she was knitting. She found it difficult to continue to sew and knit and found at times it would make her feel quite nauseous.
Jan* decided that it was time that she needed help. On examination the signs were that certain movements such as tilting her head to look up and down and rotating left and right brought on the sensation of the room spinning and made her feel quite light headed.

Jan* visited her Physio who provided treatment that involved Dix Halpike which is a maneouver used to diagnose BPPV (Benign Paroxysmal Positional Vertigo). The Physio explained that BPPV is a false sense of spinning and is often due to a mechanical problem of the inner ear when the otoconia (crystals) that are usually embedded in the utricle which become dislodged. These crystals can move into one or more of the fluid filled semi circular canals in the ear. When these particles build up in the semi circular canals, it disrupts the normal fluid movement of the canals which sense head motion. Because of this, false messages are sent to the brain.

The fluid in the semi circular canals of the ear don’t react to gravity normally, but when these crystals are dislodged into the canals, they can disrupt the fluid and cause it to move (when it should normally be still). Vestibular nerve endings then send messages to the brain saying the head is moving, even when it isn’t really – this is all because of the fluid moving due to the crystals.

This false information doesn’t match with all the messages that are being sent to the brain – the eyes are also sending signals to the brain saying that there is no movement. This mismatch of information can be perceived by the brain as a spinning sensation which lasts less than 1 minute. Jan* found that after her Physio had applied the Dix Halpike maneouver, she was able to return to her sewing and knitting without experiencing any sensations of vertigo.